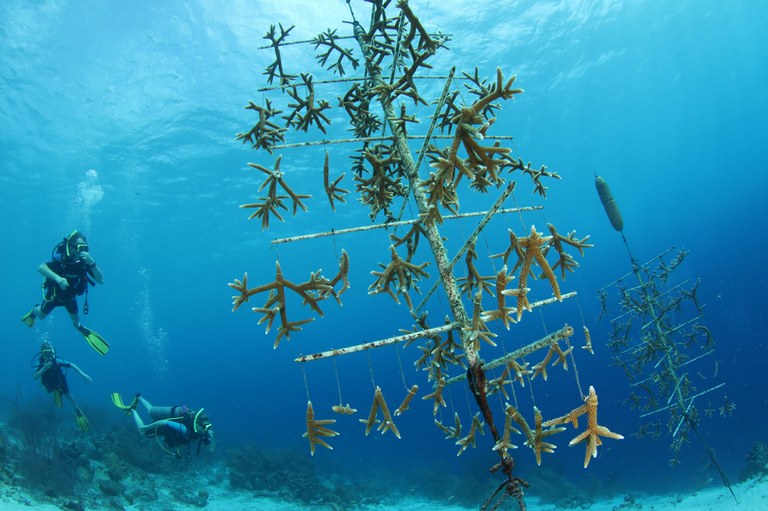 The term creative destruction, coined by economist Joseph Schumpeter, refers to the destruction of old markets by new technologies, products, services, methods or business models. What has worked in the economy, for example, by replacing the coach with the car or the time-honored vinyl record with the CD, can also be applied in nature – for example, in the reforestation of endangered coral reefs.

Microfragmenting is the magic word here. “Microfragmentation helps nature regenerate reef ecosystems,” says Diemo Niemann, chairman of Save.Nemo e.V., an environmental and conservation organization that will soon launch a project to that end.

Corals grow in colonies of individual polyps. Each animal is therefore a polyp, and hundreds or thousands of these polyps live in a single coral. In microfragmentation, the corals are broken into such small pieces or sawn up with a special band saw that individual polyps finally remain. The advantage is that the tiny coral fragments behave much like injured skin – they grow back extremely quickly, in some cases ten times faster than larger pieces of coral. The fragments are grown into new corals in coral farms.

Coral farms are, in principle, water tanks into which seawater is pumped. By controlling the growth conditions, the growth of the corals can be increased by up to 50 times.

The farming system also allows the corals to become less sensitive to ocean warming and acidification. This is because the temperature can be raised or the pH lowered in the tanks. In this way, the corals learn to adapt to new conditions and become resistant. In this way, corals that have been grown in farms can, in the best case, be transplanted back into a reef after only six or eight months. “Microfragmenting will not make the climatic challenges for coral reefs disappear, but this technique increases the reefs’ chances of survival sustainably and effectively,” says Diemo Niemann.