Spectacular discovery off the Australian coast:
Save Nemo reports…

Not all researched yet::

Spectacular discovery off the Australian coast: marine researchers from the Schmidt Ocean Institute found a mega reef off the coast of the continent. It is 1,500 meters wide and a whopping 500 meters high. “This unexpected discovery confirms that we continue to find unknown structures and new species in our oceans,” said Wendy Schmidt, co-founder of the Schmidt Ocean Institute. It is the first time in 120 years that a giant, freestanding coral reef has been discovered in the Great Barrier Reef. 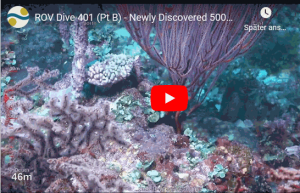 The Schmidt Ocean Institute’s expedition ship “R/V Falkor” will be underway for around twelve months. The aim is to study the oceans near Australia. During an investigation and survey of the seabed at the northern Great Barrier Reef, the oceanologists came across the new super reef. The coral reef, which at 500 meters is taller than the Empire State Building, lies at its uppermost point just 40 meters below the water’s surface.

According to the institute, the find illustrates how much there is still to discover in the oceans. “Our knowledge of what’s in the ocean has been so limited for a long time. Thanks to new technologies that act as our eyes, ears and hands in the depths of the ocean, we have the ability to explore like never before,” Wendy Schmidt said. Former Google CEO Eric Schmidt founded the private nonprofit foundation with his wife Wendy in 2009 to advance ocean exploration. To this end, the foundation acquired the former German fishing vessel “Seefalke” and converted it into the expedition ship “Falkor”.